The name “Indiana Jones” takes the mind down adventurous avenues and conjures images of desolate temples and caves filled with hidden treasures. Perhaps the most instantly recognizable fictional adventurer in pop culture, Indiana Jones has truly made his mark with his distinctive look. Harrison Ford brought the character to life with a free-spirited demeanor and a dashingly rugged appearance. Throughout the films, the most notable accessory in the adventurer’s wardrobe is the Indiana Jones hat. Indiana Jone’s unique style clearly demonstrates the enduring versatility of the fedora hat through multiple films spanning decades. Through all these years, perhaps the number one question asked by fans has been, “what kind of hat does Indiana Jones wear?”

The first Indiana Jones movie made its debut in 1981. Raiders of the Lost Ark was an instant classic, resulting in the production of a sequel, Indiana Jones and the Temple of Doom just three years later in 1984. Since then, the franchise has grown astronomically. The franchise has now spawned four full-length feature films as well as a short-lived television series in the early 1990s. With a new film bearing the working title Indiana Jones 5 on the way and set to release in 2021, now is a great time to look back at what made this series such a classic. Throughout all of these films, Indiana Jones has consistently been portrayed wearing his unique and charming hat, and his distinctive look has undoubtedly contributed to the success of the brand and the ease with which audiences of all ages can recall and identify this unforgettably iconic character. 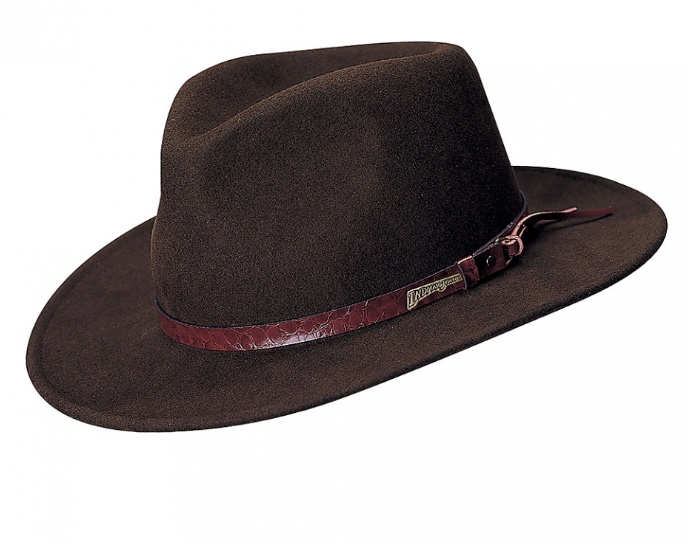 What kind of hat does Indiana Jones wear, anyway? Some may argue that its exaggerated brim and high crown may make it more akin to an outback hat than a fedora style. Truly, the hat could be considered to have attributes of both styles, though it seems most fans of the series refer to it as a fedora hat. Pictured above, the Authentic Brown Wool Felt Indiana Jones Crushable Outback Hat is inspired by the famous film fedora. This hat does feature its own unique adventurous twist in the form of a vibrant maroon crocodile style belt circling the base of the crown. The name of the titular character can be seen on the side of the band, so there’s no mistaking that this is a genuine Indiana Jones hat!

It’s no secret that part of the appeal of the Indiana Jones series is the effortless attractiveness of the main character. No matter what perilous situation he finds himself in, he endears himself to the audience with his larger-than-life personality as well as his striking sense of style. Anyone looking to replicate this look without doing a full-on costume may incorporate elements of the Indiana Jones-style into their everyday wardrobe with ease. Take a page out of Indy’s book and try rocking a bold outback style or a timeless fedora hat with your everyday wear! Give your look a thrilling edge when you buy an Indiana Jones hat today!